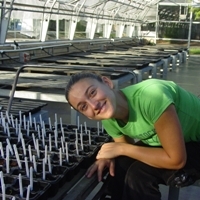 Do you ever wonder about your garden plants, think or speculate curiously, find yourself filled with admiration, amazement or awe.

Talk to your Garden Plants!

I’ve long believed that all living things have something to say, if we only knew how to listen. Humans have talked to their garden plants and anthropomorphized them in folklore and mythology for centuries, but recent science has demonstrated, we are led to believe, that plants do talk, and even hear, albeit in their own secret ways.

They can sense, and then relay, changes and threats to their environments, and even assist and protect specific ‘family members’
In a 2012 study, Monica Gagliano, picture left, of the University of Western Australia, found that corn seedlings submerged underwater grow toward sound, and that their roots communicate with one another with clicking noises. A different study published in February 2013 found that sagebrush emits a chemical warning to nearby kin when an individual plant is attacked. Clones of the original plant, the nearby kin, then suffered less damage and were more likely to survive.

Plant communication also has applications in companion planting, the concept of planting certain vegetables, herbs, and flowers together for protection and improved growth or flavour  In the ‘three sisters’ method, for example, you would plant beans at the base of corn, so the bean plants climb the stalks, then plant squash beneath the beans, the squash vine inhibits weed growth.
Dr. Gagliano conducted another study in which chilli seeds were planted separated from neighbouring basil with a barrier blocking light and chemical signals. Seeds planted without basil or other chilli plants nearby, or with fennel in the vicinity, were slow to germinate; but the seeds near but separated from the basil germinated as usual. It is believed that the plants influenced the seeds through acoustic signals, ‘talking’ to the seeds, encouraging them grow under the most suitable conditions.

Your garden plants may speak in their own languages, but as we learn more about their peculiar communications, the more we can hear and understand, and better meet their needs as well as our own. Whether you play Beethoven for your Boston fern or talk to your tomatoes, know that they’re likely hearing you on some level and may reward you for the attention. Just make sure to plant some friends and family too.

When a South African botanist Lyall Watson claimed in 1973 that plants had emotions that could be recorded on a lie detector test, he was dismissed by many in the scientific community.

My years of gardening experience have convinced me that plants communicate with each other. I suspect that the presence of the younger plant has inspired my old one, reminding it of how much fun it is to bloom and thrive.

Sound is so fundamental to life that some scientists now think there’s a kernel of truth to folklore that holds humans can commune with plants. And plants may use sound to communicate with one another.

Gardening Tips in the Southwest USA – Which Garden Plants

Grow Your Own Vegetable Garden