History of the Chinese Garden 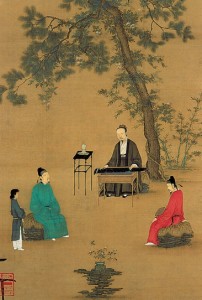 Chinese Gardens were built for royalty and the higher ‘scholar’ classes of China to escape from daily life and contemplate nature as well as providing a spiritual shelter. The gardens were man-made and often featured ponds, pavilions and rockeries. They were designed to show the best parts of nature in an artistic manner. The gardens were designed to provide a sensory experience. For example: through the sound of water and chimes, through the aroma of flowers and through the texture of the pathways under foot.

Studying the Chinese Garden and its presence throughout the many regions of China allow people to gain insight into the culture and history of the country. Records of Chinese Garden History goes back as far as the Shang Dynasty and the designs of this type of garden has evolved through the millennia.

The classical Chinese Garden is considered a work of art and has influenced landscape design and gardening across the world. It is also said that these oriental style gardens have had some influence on Buddhism as well as countries other than China, particularly throughout Asia.

There are certain elements that are considered essential to the design of the classical garden.

Architecture is important within the design of the garden and is usually in the form of a pavilion from which the rest of the garden is best viewed.

Rocks are used for structure and aesthetic purpose.

Water is used often in the form of ponds, streams and fountains and goldfish, carp and ducks were usually installed within the water features.

Plants were used within the gardens in symbolic ways such as:

Plants were also chosen for the affect they have on the senses.

Banana trees were planted due to the noise they made in the wind.
Plants and trees that bloom in colder months (such as chrysanthemums and plum trees) were considered strong and were favoured as they were a symbol of overcoming adversity.

Gardens in Northern China were built mostly for royalty and some of those that were created between 1368 – 1644 (the Ming Dynasty) and 1616 – 1911 (the Qing Dynasty) still exist today.
These gardens were costly, required lots of labour to complete and were lavishly decorated. They were designed to show off the wealth of the royals.

In Southern China the gardens were built for scholars and merchants and tended to be in cities or towns. People came to be close to nature and so these gardens focused more on natural beauty for the enjoyment of officials and other well-educated people.

Suzhou in the Jiangsu Province is known for its classical gardens and became a centre for supplies of the garden industry and for designers (particularly during the Ming and Qing dynasties). Its proximity to the Grand Canal meant it was easily reached and it became popular with the merchants and scholars who enjoyed the Chinese Garden.

There are many gardens in this region that are currently listed as sites of important national cultural heritage.

Garden ideas from other peoples Gardens

What makes a good Garden Landscape

Bougainvillea for the Garden

Make your own Artificial Rockery