What are Air Plants – Tillandsia? 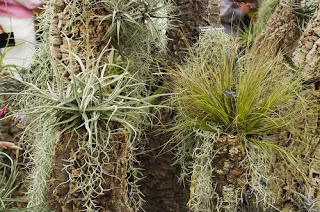 Air Plants grow without soil.
The Air plant, genus Tillandsia are a type of epiphyte.
Without feeding roots (some types have what appear to be roots but these are used for anchorage) they can be found normally growing on a host but they are not parasitic and take no resources from the host.
Moisture and nutrients are taken into the air plant via it’s leaves or bracts from the air.
They grow in many  subtropical and tropical parts of the world.
Mostly they come from Central and Southern America.
Nowadays they are distributed worldwide as many Tillandsia are sold as houseplants.
One species, Tillandsia usneoides, the Spanish Moss is common site in Florida, Louisiana, Georgia and the Mississippi areas.
Some plants prefer dry desert climates, while others thrive in warm moist jungles.

Tillandsia reproduction is normally by seed but vegetative reproduction can be carried out in some cases.
A great beginner Air plant

is Tillandsia usneoides, the Spanish Moss in particular it is very easy to propagate using the vegetative method.
The Tillandsia are related to the Ananas comosus, the Pineapple and are in the Bromeliad family (Bromeliaceae).

Air plants grow larger and bloom if they are kept happy. They are happiest when kept in warm, humid conditions with plenty of indirect sunlight.

They do not like to be too cold or too hot and should be kept in conditions warmer than 10°C (50°F) and cooler than 32°C (90°F). An air plant can get sunburn (brown patches) if it receives too much light and can lose its colour if it gets too little.

It is important to water airplants properly by thoroughly misting them daily (rain watering is preferable to tap watering) or dipping them in water for 5 minutes two or three times per week.

If kept in a dry place it’s best to both mist and dip your air plant. Plants kept inside should also be fed with low-nitrogen quarter strength (one-quarter of the prescribed rate for bedding plants) fertiliser during Spring and Summer.

The plant should be dry to the touch within several hours of being watered to prevent rot. Plants when watered properly should be turgid (stiff) and full but can feel soft, lose their colour and have curled leaves when too dry or not watered properly. The flowers tend to rot easily so take care not to let them soak when in flower.

Flowers can be cut off at the stem once they have died. The plants bracts will die naturally after some time but if the tips are moistened daily this can slow the process down. Once the bracts are dead you should be able to tug them off gently.

Several weeks after the air plant blooms it will produce baby air plants or ‘pups’ from its side and the parent plant can produce several pups before dying. Once the pups reach about the same size as the parent they can be detached. The pups should come away smoothly without being tugged if they are ready.

Air plants are not potted as they have no roots. They can be attached to other items such as rocks, seashells, mirrors and driftwood (soaked to remove salt) as long as the item cannot be damaged by dampness caused by watering the plant.

Plants can be attached using clear, waterproof glue as well as wire (note, do not use copper) or staples as long as they don’t staple the central part of the plant resulting in damage and inhibit growth.

Your air plant can grow in any direction and if hung upside down on a string would eventually grow upwards to become a ball.

Tip: Over watering Air plants Tillandsia is the main cause of loss…

Displaying your Tillandsia Air Plants can be a bit of a challenge for novices and beginners.

When first purchased they might be glued to a log or a rock or some other medium like a piece of coral – Shown in picture on the right.

Not to worry, if you don’t like it – Change it.

Remove the air plant from the object very carefully. You can then mount it onto another object of your own choosing. Or if you prefer, place it in a pot. If placing in a pot – DO NOT USE SOIL…

Either use gravel in the pot or you can use Styrene foam – Break it up first – Place the gravel or styrene in the pot to about 1 inch from the top – Then add some sphagnum moss – Carefully place the air plant into the moss.

If you do not like the thought of glueing your Tillandsia air plant or you are worried about drainage if you place it in a pot – You can find a piece of driftwood or small log or a rock with crevices and holes in it.
Carefully push the Air Plants into the crevices.

As shown in the picture on the left.

If you decide to display your air plant Tillandsia in a pot, here are some airplant display ideas back in 2001.

Do You Ever Wonder About Your Garden Plants ?

Grow Your Own Vegetable Garden

Gardening Tips in the Southwest USA – Which Garden Plants

Bougainvillea for the Garden